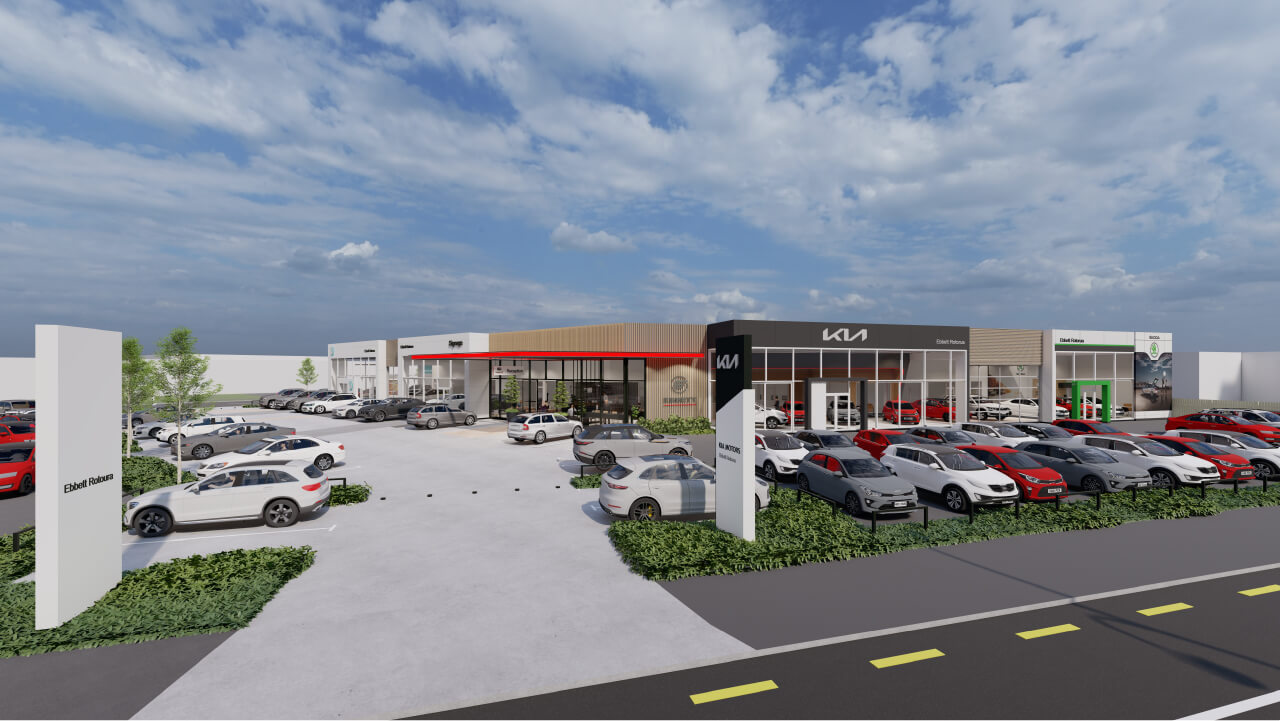 The Ebbett Group sent out the press release below on 18th May 2021. The release reads:

The Ebbett Group has announced plans for a brand new multi-million dollar car dealership in Rotorua, creating 45 jobs in construction and over 30 full-time positions when they are fully up and running. The site also brings sales representation for Volkswagen and Skoda to the city for the first time.

The purpose built 7650m2 development is situated at 270-276 Te Ngae Rd in the East of the city with access also available from Vaughan Rd. In addition to Volkswagen and Skoda, the new dealership will be home to Ebbett’s current Rotorua Kia dealership.

The premises are also expected to offer a fourth, as yet unnamed brand, creating the leading new vehicle retail outlet in the city.

The development has been given the green light based on the investment and economic growth expected for the city in the coming years, plus Ebbetts early experience of Rotorua with their Kia dealership in Lake Rd.

The Ebbett Group, founded 93 years ago in Hamilton, remains headquartered in the city and now has 18 dealerships around the North Island, from Pukekohe to Wellington, including a presence in the Bay of Plenty with their Ebbett Tauranga Hyundai and Isuzu dealership.

Managing Director and majority shareholder, Ben van den Engel, who started with the group as an apprentice technician over 50 years ago, has overseen much of the growth of the business.

Mr van den Engel said “We’ve had a great experience in Rotorua so far with our Lake Road Kia dealership. The community have been great with us and we feel really settled already, so this new dealership is something we’re terrifically excited about.”

“Rotorua is a city on an upward trajectory and it’s a great opportunity to bring in a couple of really strong European brands with Volkswagen and Skoda. These brands sell extremely well here, even though people have previously had to travel to acquire them. We’re convinced that having a flagship dealership in the town will not only help more people consider Volkswagen and Skoda but will also be a great resource for existing owners to service or upgrade.”

Rotorua Chamber of Commerce CEO, Bryce Heard, said “This is great news for the Rotorua community. Another big company coming in with a significant investment and bringing real quality brands and service into our city. It’s a beautifully stylish building that adds significantly to our environment, it’ll create new jobs and it supports Rotorua, so we’re absolutely delighted”.

The site for the new dealership is owned by local Rotorua developer Ray Cook, of the R & B Property group, who is also developing the 1.4 hectare site at Eastgate Business Park. Mr Cook said “We are looking forward to creating this very exciting development at the entrance to Rotorua and with the timely upgrading of Te Ngae Rd by NZTA this will also add to the impact of the new dealership. R & B will be using local sub-contractors & suppliers which will also add to our local economy”.

Ebbett Rotorua branch manager Ricky Brackfield can’t wait to get into the new site. He said “This is exactly what Rotorua needs – a great facility with great brands. Kia is the number 2 passenger vehicle brand in New Zealand, Volkswagen is the world’s largest car company and Skoda has gone from being the hidden gem of the New Zealand car market only a couple of years ago to a strong player today. Much of that Skoda growth has been on the back of people discovering their range through publicity around Kodiaq winning New Zealand’s car of the year in 2017 and the more recent deal to supply New Zealand Police with all their vehicles – probably the pick of the large car deals in the country.”

“Those looking for electric vehicles over the next decade will also be really well catered for. Volkswagen are already strong in that space with the e-Golf but Kia and Skoda have great electric models in the pipeline as well. We’ll be in the fortunate position of being perfectly set up for not only retailing EVs but having a service centre purpose built for catering to both fossil fuel and electric vehicles.”

“We believe in this city and we’re building for growth. The brand range will give customers breadth of choice, a great range of passenger and commercial vehicles, a strong line up of fuel and EV, availability across the price range and capacity for a strong range of used vehicles.

“All of this backed by the Ebbett Group commitment to delivering exceptional experiences in pursuit of “Customers For Life” means I already can’t wait until we’re in!”

The new Ebbett Rotorua dealership aims to be open for business in late 2022.